Since our humble beginnings at our Kansas farmhouse headquarters, we’ve worked diligently to establish a culture rooted in collaboration, support and innovation. From day one, we’ve never wavered from our values – no one ever flies solo at TGF, and when one of us succeeds, we all win. We’ve built a place where freight agents can write their own success stories!

As COO and co-owner David Barnes says, “At Tallgrass, you’re not just another number. We genuinely care about each and every single one of our agents, and we will continue to go the extra mile to show how invested we are in their success.”

Because of our team of tenacious and ambitious agents, we continue to break barriers and receive both local and national recognition each year. That’s why we’ve decided to begin sharing our agent’s stories – each comprising of a unique background and set of circumstances. With the right resources, mentorship, cutting-edge technology and top-tier back-office support, everyone has the opportunity to write their own success story here at Tallgrass.

In this edition, we’re shining the spotlight on one agent who, despite unprecedented times, made the decision to join the TGF family during the pandemic.

This agent came to us from a larger freight brokerage, and quickly became one of the fastest-growing performers in the company, surpassing goals and milestones in a fraction of the average timeframe.

Despite the success, a number of factors left this agent feeling unfulfilled. In addition to the bureaucracy and office politics, there was no alignment from a cultural perspective. He continually felt frustrated by the lack of respect, appreciation and recognition. Aside from his paycheck, he felt like just another cog in the proverbial machine.

He decided to part ways with the company shortly before Covid hit. “Quite honestly, when the recruiter first contacted me, I initially thought the opportunity was too good to be true!” he laughs. “But after piquing my curiosity,” he continues, “I hopped online, did some research and was blown away by all the positive reviews I found. I quickly learned that Tallgrass really is unlike any other freight brokerage in the country.”

So, what ultimately drove him to join Tallgrass? “Everyone I spoke with – Sean, Damon, David, Chelsea – they were all incredibly authentic and transparent. Not only did they speak about the organization like it was an extension of their family,” he shares, “but they were incredibly invested in helping each person find their rhythm and thrive – it was so infectious.”

Making a Career Shift During Covid

The opportunity to join Tallgrass occurred at a time of fear, uncertainty and economic disruption. The pandemic was a challenging time for many, this agent included. “It was definitely a scary time,” he admits as he reflects back. “When I started, it was like the world was against me. We were at the height of Covid, my son’s school, like many, held classes virtually, aftercare programs were canceled, I had my credit card stolen and two of my family members had passed away.”

But the Tallgrass team’s support allowed him to get up and running quickly and find success quickly. “I can’t even begin to describe how supportive Damon, David and the team were,” he says. “Leadership really has strong family values and they were there for me every step of the way, helping me overcome every obstacle thrown my way. I’m so thankful. They have proven time and again that they wholeheartedly care about me, my book of business and the entire company as a whole.”

His son was also a source of inspiration for him. “I wanted to build something that was my own, that I could be proud of,” he says. “And to have that aspiration supported and backed by a company like Tallgrass is absolutely surreal. From the technology and back-office capabilities to the CRM and extensive resources . . . it all really empowered me to go for it.”

Being Part of The Tallgrass Family

Thanks to the support he’s received, it’s been smooth sailing for him ever since he started. Of the many highlights this agent has experienced as part of Tallgrass, the annual Agent Roundtable event stands out as representing how invested TGF is in providing continued education and professional development for its freight agents. “I was impressed,” he smiles. “Not only did I get to meet people from all across the country, but it really opened my eyes to how committed management is to helping their people succeed in both business and life.”

“This was the best decision I’ve ever made for myself. The CEO literally picks up the phone and calls to check in with me – there’s just no other company like it.” “Oh,” he adds, “and the paychecks are unlike anything I’ve ever seen.”

From a supportive team to a top-tier paycheck, this agent has found the success he was searching for at Tallgrass Freight. His story is one of so many, and why we’re committed to being the best freight brokerage in the country.

Are you ready to write your own success story? Take the next step by joining the Tallgrass team today. 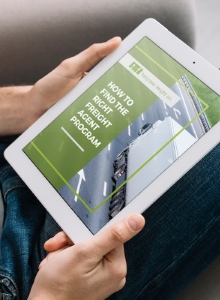